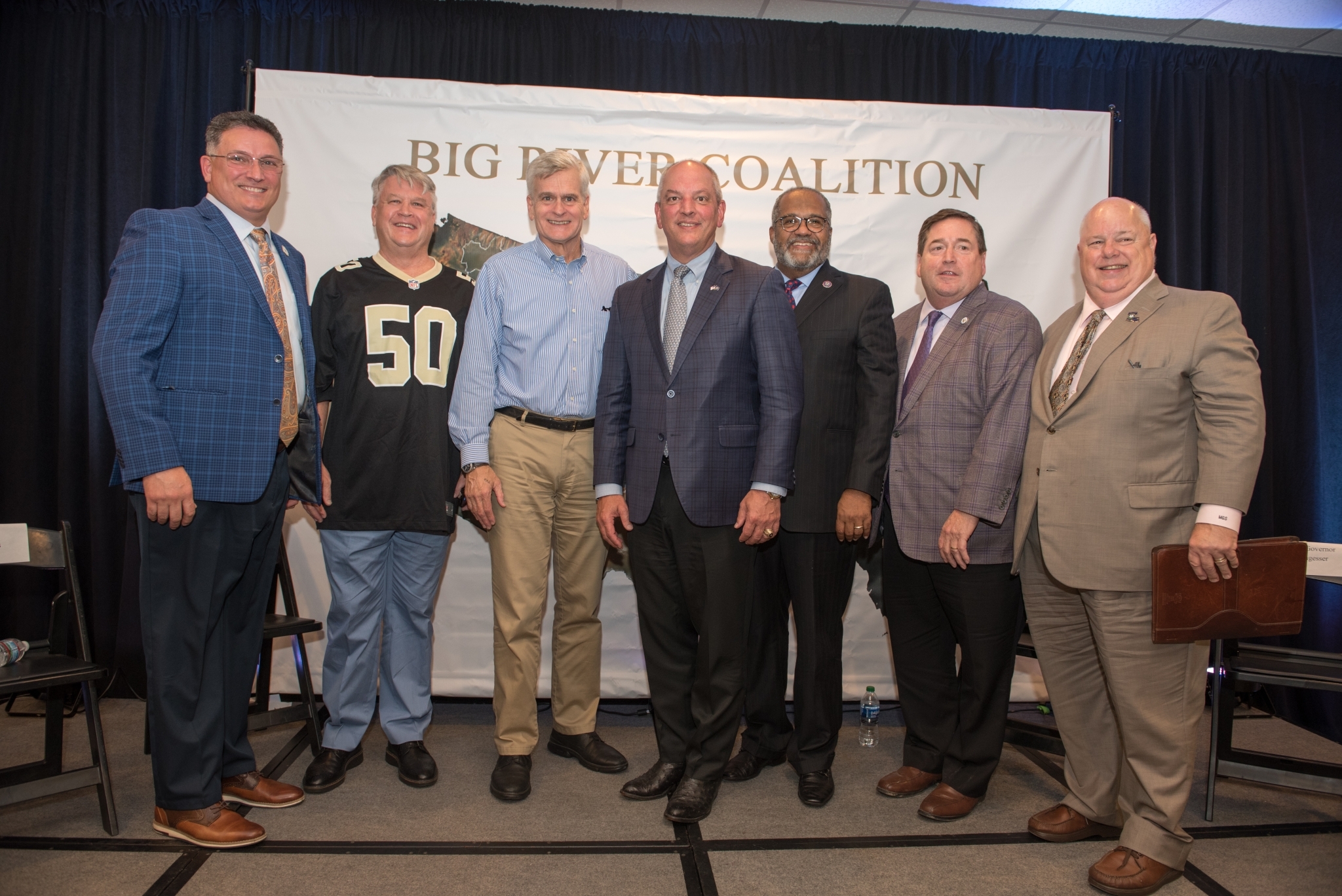 New Orleans – August 16, 2022 – Louisiana elected officials, federal partners and maritime stakeholders joined the Big River Coalition to celebrate the U.S. Army Corps of Engineers (USACE) completion of the first two phases of the deepening of the Mississippi River Ship Channel, which presently provides a maximum draft for vessels to the Port of New Orleans at 50-feet. The Ship Channel has been mechanically deepened for approximately the first 200 miles of the Channel but additional efforts are required to open the deeper draft north of the Huey P. Long Bridge.

“The deepening of the Mississippi River Ship Channel is a transformational project that will bolster our economy, create and sustain jobs, and solidify Louisiana’s status as a global anchor for trade,” said Gov. John Bel Edwards. “The economic growth from this project is expected to create several thousand new jobs, which comes on the heels of Louisiana reaching the lowest unemployment rate in state history. It’s an exciting time for our state, and I look forward to facilitating even more growth thanks to the partnerships we have forged.”

Presently, the increased draft is available through the Port of New Orleans to the Huey P. Long Bridge at Mile 106 Above Head of Passes (AHP). Expansion of the deeper draft above the Huey P. Long Bridge from 49 feet to 50 feet will require additional improvements although the dredging has been completed to Mile 175 AHP along with the additional 20 miles of Southwest Pass (195 miles total).

Phase 1 work began on Sept. 11, 2020 when Weeks Marine’s cutterhead dredge CAPTAIN FRANK commenced work on the initial dredge contract five miles Above Head of Passes. The USACE also awarded a contract for both another cutterhead dredge and a hopper dredge to Manson Construction Co. to complete the first phase of the deepening. The Mississippi River Ship Channel is home to four of the Nation’s top 15 ports by annual tonnage (Port of Greater Baton Rouge, Port of South Louisiana, Port of New Orleans and the Plaquemines Port Harbor and Terminal District). The overall costs for the project were estimated at $250 million, the State of Louisiana committed $81 million to match the non-federal sponsor cost-share.

The M/V CAPRI loaded with a record 134,706 metric tons of coal was the first vessel to transit on the Ship Channel with a draft of 50 feet upon departure on August 5, 2022 – almost 10 years to the day after the Big River Coalition revitalized efforts to deepen the Ship Channel. The CAPRI departed the Ship Channel with a Crescent River Port Pilot on board until the pilot exchange occurred at Pilottown when a Bar Pilot took over for the outbound voyage through Southwest Pass to the Gulf of Mexico.

Captain Michael Miller, President of the Associated Branch Pilots (Bar Pilots) and Chairman of the Big River Coalition, said: “The Bar Pilots applaud the ongoing joint efforts of local, state and federal governmental agencies, our elected representatives and the maritime community to keep our ports competitive. The completion of the 50-foot deepening project on the Mississippi River Ship Channel is proof positive that the Lower Mississippi River Valley is open for business on a new level.”

“As we fight to overcome inflation and supply chain bottlenecks, our ports are more important than ever,” said U.S. Rep. Troy Carter. “Here in Louisiana, the Mississippi connects us all — economically, culturally, and physically. It’s important that we work together and speak with one voice as a region on behalf of our shared goals. That’s why this project to deepen the channel to increase shipping opportunities is so exciting — we are opening a new chapter to help energize our economy to new heights and continue to help lower costs for Americans.”

“The project to deepen the Ship Channel is important to the state of Mississippi and all states connected by the Mississippi River and Tributaries,” Hyde-Smith said. “I appreciated work by Sean Duffy of the Big River Coalition during the record 2019 flood to build the case for providing appropriations for the emergency channel maintenance, in addition to pursuing increased annual appropriations and developing the Regional Dredge Demonstration Program in the Water Resources Development Act of 2020. My office continues to work with the Big River Coalition to advance the multiple benefits provided by the regional approach that improves the ability of the Army Corps to maintain the fully authorized 50-foot channel dimensions along the nation’s most prolific waterway. The increased draft of the Ship Channel will promote waterborne commerce and reduce transportation costs for Mississippi farmers and commerce on the river for decades.”

Colonel Stephen Murphy, Commander of the USACE New Orleans District, commended the project’s partnerships between the federal government, State of Louisiana, Congress and industry stakeholders. “The National economy will benefit by more than $127 million annually and the project will pay for itself in two years,” Murphy said. “It’s a win-win for Louisiana and America and we are proud to play a role in a project with such national significance.”

Louisiana legislative leadership said they were proud to play an essential role in providing the non-federal funding for this transformational project. “The Louisiana House of Representatives and Louisiana Senate worked collaboratively to support this critical project,” said Louisiana Speaker of the House Clay Schexnayder. “The Mississippi River is the lifeblood of the economy of not only Louisiana, but the Nation and the benefits of a mightier Mississippi River will be realized for generations to come.”

Big River Coalition Executive Director Sean Duffy said, “The deepening generates increased waterborne transportation cost savings that provides the U.S. a strategic advantage to compete in global markets. The Mississippi River connects more miles of navigable waterways than the rest of the world combined and maximizing this Big River is critical to maximizing our greatest artery of trade. The deepening of the Mississippi River Ship Channel is truly a historic project that will create thousands of jobs, has already restored 2,000 acres of wetlands and will generate increased revenue for those whose livelihoods depend upon the River for generations to come. The Big River Coalition appreciates the diligent and unwavering support from Governor John Bel Edwards, the U.S. Army Corps of Engineers, Louisiana Department of Transportation and Development, the U.S. Coast Guard, the Louisiana Legislature and the Congressional delegation from Louisiana and across the Mississippi River Basin. Waterways Management is a Team Sport and the accolades should be shared with all members of Team Mississippi River as were the many hurdles that had to be cleared in this challenging process.”