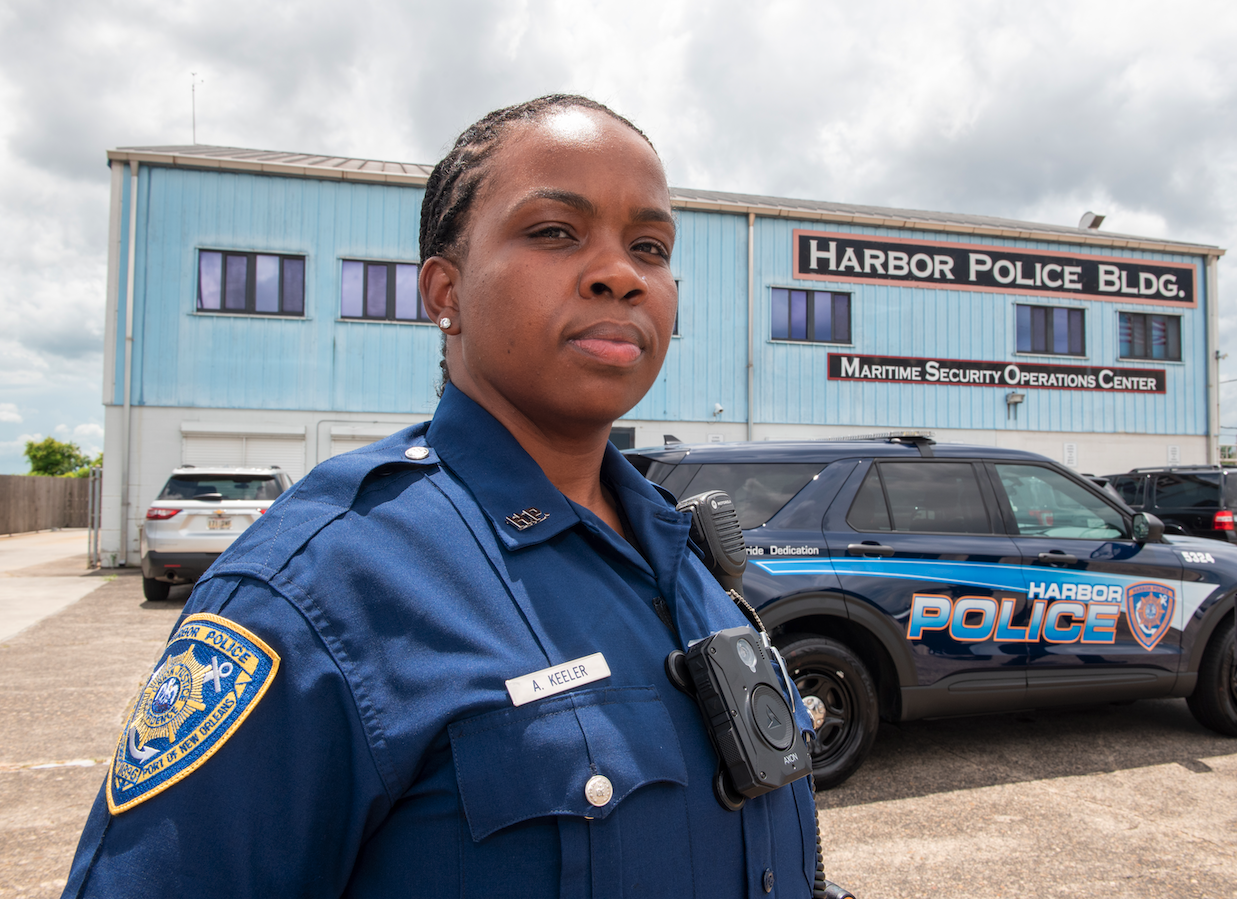 NEW ORLEANS – July 18,2022 – Harbor Police Department (HPD) Chief Melanie Montroll completed her first 100 days at the helm of the specialized law enforcement agency, delivering on her top priorities to attract and retain the best recruits, with a focus on diversity, community, training and homeland security.

Montroll’s early accomplishments are headlined by the introduction of body-worn cameras (BWC) for all HPD officers. In effect as of today, July 18, Harbor Police officers are now trained and equipped with BWC recording devices, which will support HPD’s continued commitment to transparency, while strengthening performance and accountability.

“The safety of our community and the working riverfront are our Harbor Police Department’s top priorities. The implementation of this important body-worn camera program will enforce HPD’s status as a leading police force known for its integrity, high standards and service,” said Brandy D. Christian, President and CEO of the Port of New Orleans and CEO of the New Orleans Public Belt Railroad. “We are extremely proud of Chief Montroll for all she has accomplished in her early tenure, and we know that under her thoughtful leadership, HPD will continue to thrive as a law enforcement agency uniquely specialized in maritime and homeland security.”

“Serving with the talented and skilled officers I have on our force is a true honor, while also being able to promote and recruit the best of the best candidates to join us in service,” said Chief Montroll. “This has been an informative time in my tenure so far, and I look forward to seeing how HPD will continue to shape and grow. I appreciate the support of the Port and NOPB’s leadership, my officers, and the tenants and communities we serve.”

In addition to ensuring HPD officers have access to the latest training and technology, Montroll is prioritizing recruitment and retention of the best qualified candidates who share in HPD’s mission to protect and serve with the agency’s newly adopted motto, “Honor. Pride. Dedication.”

HPD welcomed four new officers in the last month including one post-certified officer and three police academy recruits currently completing the 16-week training program. Montroll has also implemented a Special Response Team (SRT) with the sole mission of ensuring top security and maritime safety. Consisting of officers trained in special operations — such as response to terrorism, active attacks and civil unrest — this team will further enhance the security of the port.

Officers who join HPD become part of a specialized law enforcement agency that contributes to homeland defense by ensuring the safe, secure and efficient flow of cargo and cruises; as well as a safe, secure environment for Port tenants, workers, community and visitors throughout the jurisdiction of Port NOLA.

Montroll has also grown the HPD fleet and visibility, with several new police units and modern branding across the land and water vessels.

Montroll recently attended an advanced training at Quantico, the Command College for Chiefs of Police, which is specifically designed for leaders in law enforcement that are selected and nominated from throughout the country. She is a 21-year veteran of HPD and has steadily progressed through the ranks, becoming Corporal in 2003, Sergeant in 2008, Lieutenant in 2015 and having served as Assistant Chief from 2017 to 2022.

Montroll is a member of the Louisiana Association of Chiefs of Police, International Association of Chiefs of Police and the National Organizations of Black Law Enforcement Executives, and is a graduate of the FBI Leeda Leadership Trilogy program. She is also a member of the New Orleans Regional Leadership Institute class of 2022. Montroll also obtained her Post Master Instructor's certification from the Police Officer Standards and Training Council. She received her Boat Operator's certificate from the Federal Law Enforcement Training Center in Glynco, Georgia. She holds a Master of Business Administration from the University of New Orleans, a bachelor's degree in Business Administration, and is a graduate of the School of Police Staff and Command at Northwestern University.