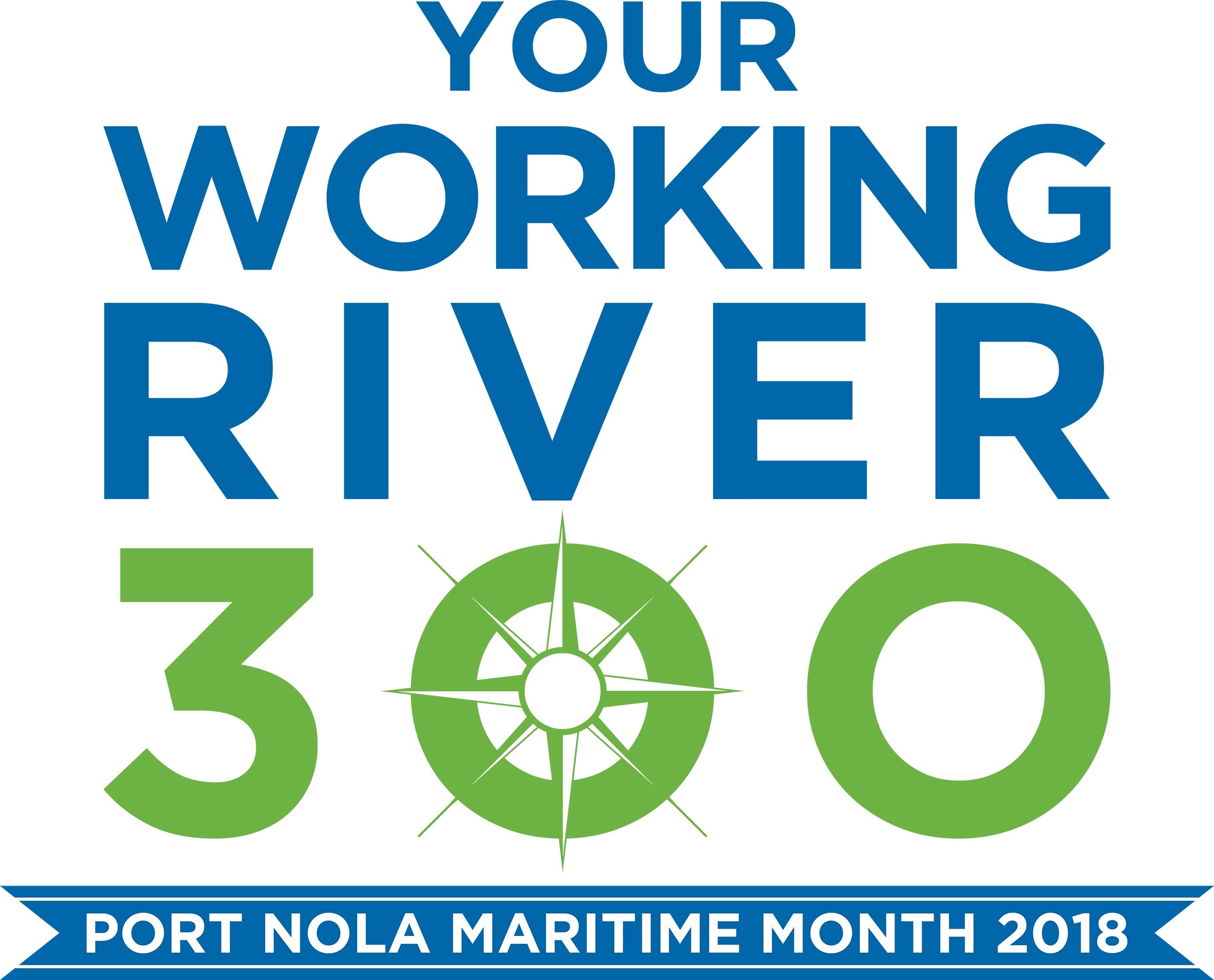 NEW ORLEANS—May 3, 2018—The Port of New Orleans (Port NOLA) is celebrating its second annual Maritime Month through May and National Maritime Day on May 22nd to pay tribute to the region’s rich maritime history and to recognize the hardworking men and women who serve in the industry.

The theme of Port NOLA’s 2018 Maritime Month is “Your Working River 300” to honor the city of New Orleans’ Tricentennial year, and includes a number of activities to demonstrate the industry’s vital role in job creation and its connection to the community.

“We have coordinated with city and state elected officials, media partners, and various stakeholders to celebrate the hardworking men and women of the Port, Public Belt and maritime industry who play an important role in the success of our city, state and region,” said Christian. “Maritime Month is an opportunity for Port NOLA to connect with our community and invite them to see for themselves what we experience daily — the magic of the working river in action.”

Port NOLA also hosted students from New Orleans Charter Science and Mathematics High School who participated in the second annual Maritime Month Career Exploration Day, an event that allows high school students to learn about the diverse career paths available in the maritime industry. Port NOLA has also partnered with WWL-TV to broadcast 15- and 30-second promotional ads throughout the month touting the benefits of “Your Working River 300” which began airing May 1.

The Port will honor the men and women who serve in the Harbor Police Department during National Police Week May 13-19. As part of Infrastructure Week, May 14-21, Port NOLA will host the Southeastern Infrastructure Summit on May 17 from 9:30 a.m. – 12:30 p.m. The event will be headlined by Louisiana Gov. John Bel Edwards and New Orleans Mayor-elect LaToya Cantrell who will be sworn into office May 7. Speakers will discuss the critical role that infrastructure plays in the regional economy, discuss the future of financing major infrastructure projects, and explore ways to better connect the region.

On May 24, Port NOLA’s finalized Strategic Master Plan will be released. The New Orleans Public Belt Railroad will host an Open House from 4:00 p.m. – 7:00 p.m. May 24. Finally, the Port will host its monthly public boat tour May 25.

“As the unified voice of seaports in the Americas, AAPA is proud to recognize the contributions of our member port authorities as we celebrate Maritime Month in May,” said Kurt Nagle, President, and CEO of the American Association of Port Authorities. “In recognizing the value that maritime activities play in our daily lives, Maritime Month is also an opportunity to remind policymakers that ports need their support to be successful in facilitating the movement of trade that links all of us to the global economy.”

Declared by Congress in 1933, National Maritime Day calls attention to America’s proud maritime heritage and to honor the men and women who serve and have served as U.S. merchant mariners.

The Port of New Orleans is a deep-draft multipurpose port at the center of the world’s busiest port system — Louisiana’s Lower Mississippi River. Connected to major inland markets and Canada via 14,500 miles of waterways, six Class I railroads and the interstate highway system, Port NOLA is the ideal gateway for containers and breakbulk cargo, as well as passenger cruises. A growing network of ocean carrier services, along with services like container-on- barge, make Port NOLA the superior logistics solution. On February 1, 2018, Port NOLA acquired the New Orleans Public Belt Railroad, a Class III switching railroad with the primary mission of serving the Port, its six Class I railroad partners and local industry.