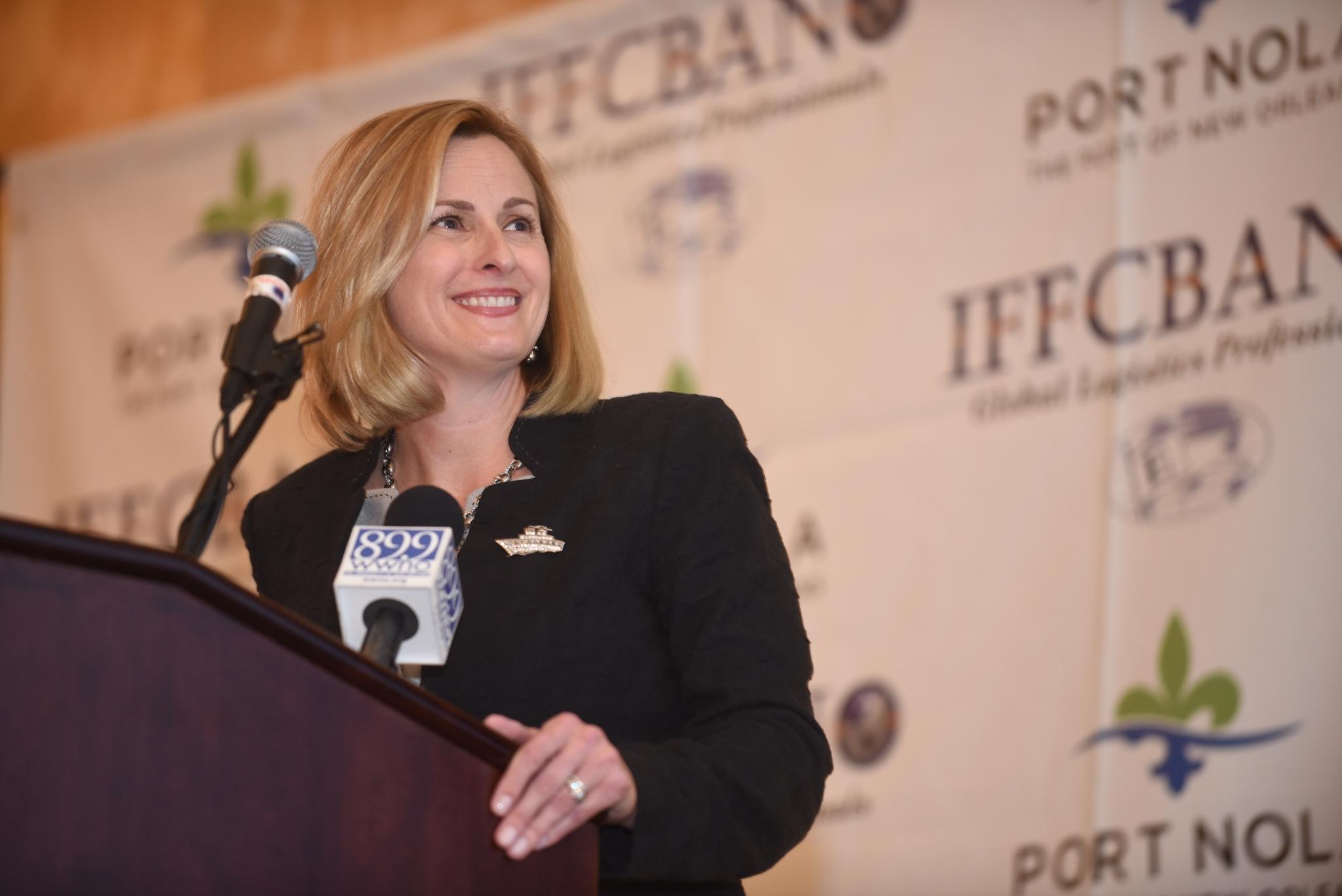 NEW ORLEANS—November 9, 2017—Port of New Orleans President and CEO Brandy D. Christian highlighted gains in cargo and cruise volumes in 2017 and positioned the Port as an international gateway, offering superior logistics solutions with seamless operations between river, rail, and road and serving as an economic catalyst for the region and state. The announcement was made at the annual State of the Port address today hosted by the International Freight Forwarders & Customs Brokers Association of New Orleans.

“We achieved this milestone for the third year in a row and anticipate continued growth in our container market. Experts are projecting a 400,000 TEU increase in volume from the Gulf region between 2017 and 2020, mostly fueled by the exports of petrochemical resins produced in Louisiana,” Christian said. “To offer some local perspective, a half- million TEUs is enough to fill every cubic foot of the Mercedes-Benz Superdome more than 5 and a half times.”

The predicted increases in volumes are leading to more opportunities with the largest ocean carriers in the world including CMA CGM’s PEX 3 direct all-water container service to Asia and the carrier’s direct South America service to Brazil. Port NOLA has successfully retained the service of all three-major mega-container carrier alliances.

In addition, Port NOLA’s inclusion in the U.S. Department of Agriculture’s Southeast U.S. In-Transit Cold Treatment Pilot Program, which treats refrigerated cargo to meet customs compliance in-transit rather than after arriving in the U.S., serves as an opportunity for new business in places such as South Africa.

Breakbulk remains an important part of the diverse cargo operations at Port NOLA. The latest breakbulk data, the fiscal year 2017 versus 2016, illustrates a 17% growth, led by strong steel and non-ferrous metals. Port NOLA imported 2.4 million tons of steel in the fiscal year 2017, enough to build 50 Crescent City Connections – including both spans.

Another example of the diverse cargo operations at Port NOLA is the return of roll-on, roll-off service for the first time since 2005, with the inaugural call of the state-of-the-art vessel the Bahri Yanbu.

“The return of roll-on, roll-off service increased our connection to the Middle East, Indian subcontinent, and the Mediterranean Sea and helps us meet the diverse needs of the marketplace,” Christian said. “The Bahri ships are modern vessels that can simultaneously accommodate Project, Roll-on/Roll-off, Breakbulk, and Container cargo.”

Port NOLA is on target to surpass 1 million cruise passenger movements for the fourth consecutive year in 2017 and hit record volumes for the seventh year in a row. Carnival Cruise Line continues to sail year-round itineraries with the Carnival Dream and Carnival Triumph. In 2018, Norwegian Cruise Line will deploy the 4,000-passenger Norwegian Breakaway, the largest cruise ship in both length and passenger occupancy to ever sail from New Orleans. Royal Caribbean International will return to the Crescent City in 2018 with the Vision of the Seas. Additionally, riverine cruising accounts for 2 percent of total cruise revenue and continues to grow with the arrival of the American Queen Steamboat Company launching the new American Duchess.

Port NOLA is also focused on integrating transportation modes with the planned acquisition of the New Orleans Public Belt Railroad from the City of New Orleans. This acquisition, which is expected to be complete around the end of the year, will improve the Port’s intermodal capabilities and global competitiveness while allowing strategic investments for growth and improve service to the six Class I railroads and Port NOLA tenants.

“It is a win-win-win for all parties involved,” Christian said. “Industrywide, all logistic elements become more closely integrated and shippers who must have or prefer rail benefit from more seamless logistics solutions.”

Christian outlined why the role of Port NOLA transcends more than a port. It is a major Gateway that connects six continents to inland North America with superior multi-modal connectivity while serving a vital role in the U.S. economy.

“As a gateway, cargo will move seamlessly through our port, from river to rail to road and from road or rail to river,” Christian said. “We are near to rolling out our Gateway Master Plan that will be focused on delivering the infrastructure for tomorrow to achieve our potential with integrated transportation solutions.”

Christian added that the Port is planning for growth thoughtfully, strategically and responsibly and is considering environmental impacts and safety issues.

“Our environmental sustainability programs will continue to grow, such as the Clean Truck Replacement Incentive Program. Through Clean TRIP, 39 truck owners who service Port NOLA were able to replace their older model trucks with newer, cleaner models,” Christian said. “As a result, carbon dioxide emissions are reduced by 247 tons per year, air pollutants are reduced by more than 90%, and each truck driver saves an average of 590 gallons of fuel and approximately $1,500 in fuel costs each year.”

Christian noted Port NOLA’s accomplishments are the results from many dedicated leaders and employees, including Port tenants, local businesses, and workforces.

“We will never be a true Gateway without the hard-working dedicated men and women in the maritime and transportation industry,” Christian said.

Louisiana Gov. John Bel Edwards touted Port NOLA’s importance as an economic engine for the state and region in a pre-recorded video.

During her address, Christian unveiled a video highlighting the people that perform the work that helps the Port achieve its goals. The videos can be viewed below.

The Port of New Orleans is a deep-draft multipurpose port at the center of the world’s busiest port system — Louisiana’s Lower Mississippi River. Connected to major inland markets and Canada via 14,500 miles of waterways, six class-1 railroads and the interstate highway system, Port NOLA is the ideal gateway for containers and breakbulk cargo, as well as passenger cruises. A growing network of ocean carrier services, along with services like container-on- barge make Port NOLA the superior logistics solution.

Governor Edwards on the Port of New Orleans